Yes, there is a show tomorrow!

Hey folks!  Just a note to let you know that there is a Canada Day show.  Word is getting out and the attendance numbers are climbing.  We start at 7:30 sharp, but we advise that you show up by 7:00 pm if you want to avoid disappointment!

Hope to see you all there.

Just a reminder that there are just 6 performances remaining of this year’s production of Macbeth in Odell Park.  We’ve had strong strong audience turnout so far and look forward to seeing you there!  Also remember that tonight, Tuesday June 29th, is 2-for-1 ticket night.  Full show details and weather policy can be found here Macbeth: Full Details

Hope to see you all there!

Media Coverage of Bard in the Barracks

There’s a great article appearing in today’s Daily Gleaner about Macbeth in Odell Park.  Don’t miss out on a unique opportunity to see Shakespeare as you’ve never seen it before.

The article can be found at http://dailygleaner.canadaeast.com/liveit/article/1114326

It’s that time of the year again where Bard in the Barracks is looking for volunteers!  We need people to help guide the audience through the park as well sa to work the door and concessions until intermission.  Volunteers are granted free admission to the show.  If your are working the door, you will be unable to see the show that night – but you are entitled to come for free another night

Volunteers will need to be at Odell Park at 6:00pm. Wear sturdy clothing!  Feel free to pass this along to anyone who might be interested!

If you’re interested, please let us know by email (nbacts@unb.ca) or by phone 458-7406 as soon as possible.

Bard in the Barracks Presents Macbeth in Odell Park opens tomorrow night.  Tickets are still available at the Lighthouse on The Green or at the door.  Admission is $13 for Adults, $10 for Students/Seniors, Children under 12 get in free.  Tuesday July 29th is 2 for 1 ticket night.

Arrive by 7:15 in order to get into place for the show which begins at 7:30.  Sturdy shoes are strongly recommended. 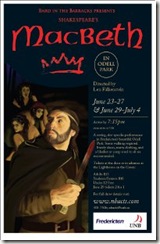 Posters for Macbeth in Odell Park have been appearing around town recently.  Tickets are still available at the door or at the Lighthouse, downtown Fredericton.

Design credit for poster and illustrations goes to Drew Kennickell.  Check out his site at www.drewkennickell.com

The Bard is Back in the Park!

Celebrating their fifth anniversary, Fredericton’s acclaimed Bard in the Barracks returns to Odell Park with their production of Shakespeare’s classic tragedy, Macbeth. Returning to the concept that wowed audiences last year, the play will unfold at a number of spectacular locations in the park, with audience members led from scene to scene. As night descends and the witching hour approaches, Bard in the Barracks will thrill with supernatural doings and ghostly visitations, live music, epic battle scenes, and all the horror and pathos of Shakespeare’s most stirring tragedy.