Ready for some more magic?

There may be a few clouds in the sky, but the weather looks like it’s coming over to our side. That day full of sun will surely put you in the mood for some spectacular live theatre.

Don’t forget that Odell park acts like a giant umbrella, with all those trees, and a little bit of rain causes this truly magical mist to rise in the woods. It’s really quite beautiful, and our spirits love running around in it. 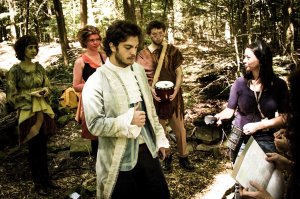 A little rain can’t stop this Tempest!
What, did you think we’re made of sugar?
The forecast calls for little to no rain, which means the show is on tonight!

Prince Ferdinand’s giving the thumbs-up, indicating that all systems are go.

Come on out to Odell park to see the show. We didn’t get to perform last night, so we’ve got an extra portion of pent-up acting for you to enjoy.

Back in Action Tonight

After last night’s washout, we hope to be back in action with performances Saturday and Sunday nights. Think dry thoughts, and see you at the park!

It’s not the end of the world!

You may have noticed some brave spirits passing out hand bills downtown, seen the artwork lovingly hand-chalked by our publicity spirits lining Fredericton’s fine sidewalks, or heard the sounds and sweet airs being generated by satisfied bardfans’ word of mouth. Now it’s your chance to see the spectacle! Tonight is our second preview, and your chance to help us figure out audience movements and scene transitions.
How’s that for interactive theatre!

And yes. We do our own stunts.

We just finished a phenomenal preview performance in front of 45 diehard bardfans! Exhausted, and covered in mud, we made our way to a local watering hole, only to be met by our own poster hung prominently, with pride.

Ready for a preview? 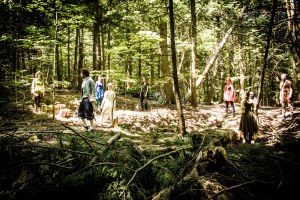 Because we are! Come tonight to help give us an idea of how to move our audiences through the show in the most efficient manner, and we’ll give you a discounted ticket price.

Not a bad deal, right?

1st dress rehearsal complete, and an outstanding success. Two more to go before previews, and audiences! Excitement is mounting, and bard-fans sure are in for another fantastical performance in Odell.

A little taste of the magical island where you’ll be marooned.
Filmed and edited by the masterful Chris Giles. 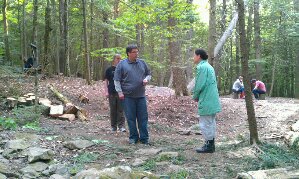 What better way to spend such a lovely spring evening? Stay tuned for more photos, and a trailer by Chris Giles.

We’re only a fortnight away from opening The Tempest, and thanks to the masterful Chris Giles we have begun work on a trailer. Last night was also a great opportunity for some publicity photos! Click on the image of Ariel to see more.

The Poster is Ready! 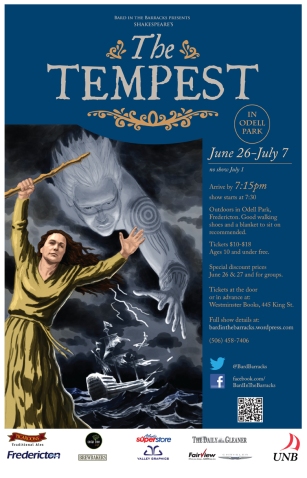 Back for another year, Drew Kennickell‘s artwork and poster design have provided this festival with a consistent and memorable public likeness.

Rehearsals and preparations for The Tempest are reaching their high point now, and it looks like it’s going to be another fantastic Bard in the Barracks production! It’s been great to take rehearsals to the park over the last while, shaping the scenes to the particular terrain of the very rugged and scenic locales where we’ll be performing. It’s a process unlike anything we normally do for conventional theatre productions, and it never fails to leave us all feeling some of the giddiness of kids running around playing make-believe in the woods… because that’s exactly what we’re doing!

Our cast for the show is once again rock-solid, led by Bard veteran Elizabeth Goodyear as Prospero, following in the footsteps of several great female actors (including Vanessa Redgrave and Helen Mirren) who have played the play’s male protagonist. Changing Prospero to a woman means changing a few words here and there in the script, but it’s surprising how well the change works, and the new dimensions it brings to the play, especially with some of the other unique touches we’re adding to the production as well.

It’s been a pleasure working with Liz on shaping our portrayal of Prospero, who is surely one of Shakespeare’s most complex and fascinating characters. Other Bard vets in the show include Rebekah Chassé’s athletic and puckish Ariel, Michael Holmes-Lauder as a wonderfully snarling Caliban, Sam Kamras as the naïve but feisty Miranda, John Ball as the lovably daft Gonzalo, and Matthew Spinney as the treacherous Antonio.

We’re also welcoming a number of new faces to the cast for the first time this year, including Kelly Lamrock in the role of Alonso, Jesse LaPointe, who is sure to melt some hearts as Ferdinand, and five very talented young actors as a chorus of Spirits who might well steal the show. Combining the role of singers, musicians, magic and mischief-makers, and representations of the human, animal, and inanimate spirits of Prospero’s island itself, the spirits will be multi-faceted and omnipresent. If you liked the witches in Macbeth and the fairies in A Midsummer Night’s Dream, you’re in for another treat!

The original music composed by John Ball in collaboration with the actors is utterly spellbinding, I can report from early rehearsals, and is sure to be a highlight of the show. Meanwhile, Lynn Addleman’s seventeenth-century costumes are taking shape and looking equally stunning (and also hilarious and fearsome, in just the right doses). And in a show full of magic, we’re looking forward to what our resident technical wizard, Mike Johnston, might have up his sleeve in terms of effects special to our park setting…

All in all, we’re having a blast and all’s going swimmingly… Mark your calendars for our run of June 26 through July 7, and help spread the word!