We regret to say…

We were holding on to the faint hope that Arthur might not have delivered a knockout blow to Hamlet. We were ready to perform again today and tomorrow, but having now received word that Odell Park is going to remain closed indefinitely, and with many of our cast and crew having other commitments beyond Thursday, we deeply regret that we must say it looks like Hamlet has taken his final bow.

For those of you who had purchased tickets for last Friday, Saturday, or Sunday (July 4-6) and have not received refunds yet, you can do so by taking your tickets to Westminster Books, or call us at 458-7406 or email nbacts@unb.ca to make other arrangements.

We greatly appreciate the expressions of support we’ve received over the last few days from the many disappointed audience members who were hoping we’d be able to perform again this week. Thanks to all of you, and to everyone who came out to see Hamlet in Odell Park.
We were thrilled to receive such great responses to the show, and to see so many of you out for what was shaping up to be (until that dastardly Arthur showed up) our most successful show ever.

Please check in with us over the off-season for more news about Bard in the Barracks. We’ve got a big tenth anniversary coming up next year, and it’s possible that Hamlet may ride again! If you like that idea, or have any other thoughts on our work, we’d love to hear them, via Facebook, Twitter, or email.

Please join us later this month for the NotaBle Acts Theatre Festival, where you’ll see what we do in the summer after Shakespeare ends. We’ve got another great lineup planned, featuring many of the very talented folks you saw in Hamlet.

Finally, we’d like to thank our sponsors and funders, who helped make the show happen this year: The City of Fredericton, UNB and the UNB Faculty of Arts, Picaroons Traditional Ales, Fairview Chrysler Dodge Jeep, Valley Graphics, the Daily Gleaner, the Cedar Tree Café and DJ Purdy’s Lounge, along with Delta Fredericton.

Thanks again to all.

We have unfortunately received word from the City that Odell Park is closed due to many fallen trees and unsafe conditions in the park. We’re not sure how long the closure will last, but it looks highly unlikely that we will be able to perform Hamlet in Odell Park tonight.

Tonight’s was to have been our final performance. We are currently considering the possibility of rescheduling one or more performances for later this week. Please continue to check this site or look for updates on Twitter (@BardBarracks) regarding possible rescheduled performances.

Patrons who purchased tickets for Friday night’s rained-out show and were planning to come tonight, and those who had purchased advance tickets for Saturday July 5 and Sunday July 6 can receive ticket refunds at Westminster Books, or at the park tonight between 6:30 and 7:30. One of our people (look for the red t-shirt) will be set up somewhere near the entrance to the park at the intersection of Waggoner’s Lane and Rookwood Ave to process refunds. If you are unable to go to either place to receive your refund, please email us at nbacts@unb.ca to make arrangements, or leave a message at (506) 458-7406 (once power in our office is back on…). You can also hold on to your tickets until an announcement is made about possible rescheduled performances if you wish, as they would be honored at the door. 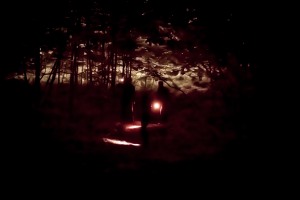 We thank you very much for your support and greatly regret the inconvenience. We hope to perform for you again soon (maybe very soon…). In the meantime, we wish you all the best as we all clean up from the storm. 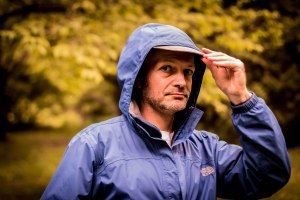 It’s not every day you get to say that!

Alas and alack! The sheer awesome power of arthur, makes it far too dangerous to run the show tonight. I mean, sure we have insurance, but we’d rather our bardfans stay on the ground to see next year’s offering.

Despite how full of threats the skies seem, we’re still planning to ahead with the show at this point. Including tonight there are only three possible performances to go, and we don’t want to leave anybody out!

Come to see Hamlet tonight, and jointly labour with us defy this downpour!

So, there’s a storm on the horizon… 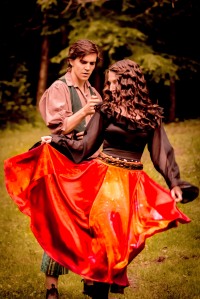 “…this most excellent canopy, the air, look you, this brave o’erhanging firmament, this majestical roof fretted with golden fire-” is not going to stay so clear and sunny forever! We’re going to keep trying to ward off this rain with our own brand of fire-dancing, but we aren’t magicians… though sometimes we play them onstage.

Thus far it seems the wake of Mighty Arthur has given our Danish Prince a pass, but we can only temp fate for so long! It looks like a lot of rain is coming on Friday and Saturday, which seems to make tonight the BEST POSSIBLE night to see Hamlet!

Warming-up in this heat is a somewhat different exercise.

Once more unto the breach!

After a hard earned, and well deserved day off, we’re back at it!

Audience support has been tremendous! Visitors from all over the province are travelling to our little circle of wagons, and they’re raving about it on twitter and facebook. Many people are seeing this twice (or have already), and if you don’t know why, you clearly haven’t seen it once!

It looks like there’s a lot of rain coming, so come to see us soon!

Hamlet in Odell Park has been drawing large and enthusiastic crowds and rave reviews! Don’t miss your chance to catch us for one of our final performances, Wednesday through Sunday at 7:30 (but arrive by 7:15).

Tonight’s weather is looking great once again (and don’t worry, the whole show takes place in the shade where the temperature’s not too bad at all). The forecast for later in the week is not looking as pleasant, so don’t delay coming out to see us, especially since with two different versions of the show happening every night, you might just want to come twice, like more than a few have so far.

See you at the park!